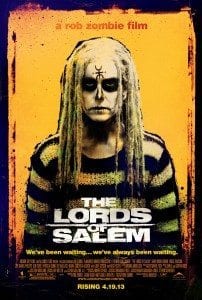 I’ve been a fan of Rob Zombie since the early 90’s when I was still in high school. His music always kind of sounded evil and it scared parents and that’s all the reason I needed to like it. When he got into filmmaking I of course was excited! His first film “House of 1000 Corpses” is a fun movie and one I still rewatch from time to time. The follow up, The Devils Rejects, was meaner and more serious but ultimately probably a better film. Both films have a 1970’s kind of raw aesthetic that has become a staple of Zombie’s style and I dig it. But, Then Zombie did the Halloween remake and its sequel and he lost me. While those films both look good I just didn’t like anything about them and I could go into the reasons why but I’d just be echoing the sentiments that so many other horror fans have already made.

Now Rob Zombie is back with a low budget Satanic film that has very little in common with what he’s done before, in Fact The Lords of Salem is his best film to date. Heidi (Shari Moon Zombie) is a local radio DJ in Salem Massachusetts who receives a mysterious record from “The Lords”. Its played on her show and sets off a series of events that to fulfill a satanic prophecy. The record deeply effects Heidi who begins hallucinating horrific visions that range from insanely creative and laughable.

While I have no interest in religion I still have a lot of love for Satanic movies like Rosemary’s Baby, The Devils Rain and Race the Devil from the 1970’s. The Lords of Salem is really a 70’s style satanic panic type of film and its one of the reasons I really liked it. Its also Zombie’s most competent movie to date and one that show’s some real growth as a filmmaker. The hillbily or white trash characters aren’t really here. The dialogue, while sometimes clunky and forced, is much improved over Zombie’s previous films. It feels overall more natural and realistic. people aren’t screaming obscenities at each other. There’s actually some decent performances in this film but, Shari Moon is still the weakest link in the chain.

Visually Zombie really ups his game! This was the first film I’ve seen in some time that I never knew what was coming next. The hallucination or nightmare scenes are pretty great! Most of them work and are at least really interesting to look at even if they aren’t scary. However there is a couple near the end that I found unintentionally funny. Zombie also really takes his time with this film. Its clear that he was influenced by the films of Stanley Kubrick or maybe he watched the great Ti West film, House of the Devil that came out a few years back. In any case he proves he still knows how to create interesting compositions with his shots and I found myself finding a lot to love about the slow drawn out camera movements.

If your old enough to remember the 80’s then your must remember Meg Foster. She was never a huge name in the 80’s but if you saw her then you’d remember her. She has these steely blue eyes that are piercing and very memorable. In The Lords Of Salem she plays the leader of a coven of witches that were burned at the stake during the Salem Witch trials. She chews scenery and turns in a fearless performance spending the majority of the films running time completely nude and covered in dirt and filth. In fact all the coven members turn in very good and at times chilling performances and do a lot to keep the plot plausible even while they’re spouting bizarre prayers to Satan.

The film was actually filmed in Salem MA which does a lot to help with the look and feel of the film. Atmosphere can be created by the film maker but having the right environment goes a long way in making it look right. I’ve seen so many horror films shot on the sun drenched streets of Los Angeles and no amount of filters and CGI can hide that. Few films actually get made where their set in the story so it meant a lot more to actually see Salem streets and buildings in a movie about Salem.

The Lords of Salem shows some real growth in Rob Zombie’s skills and story telling abilities. I hope that he continues down this path and moves away from hillbilly families and white trash strippers of his past films. The Lords of Salem is a visual feast of evil and has atmosphere to spare! Ironically it might be the hardcore fans of Zombie’s past work that might be put off by this film. But for those of us that were turned off by the Halloween remakes, this might just be the film that makes you love Rob Zombie again.