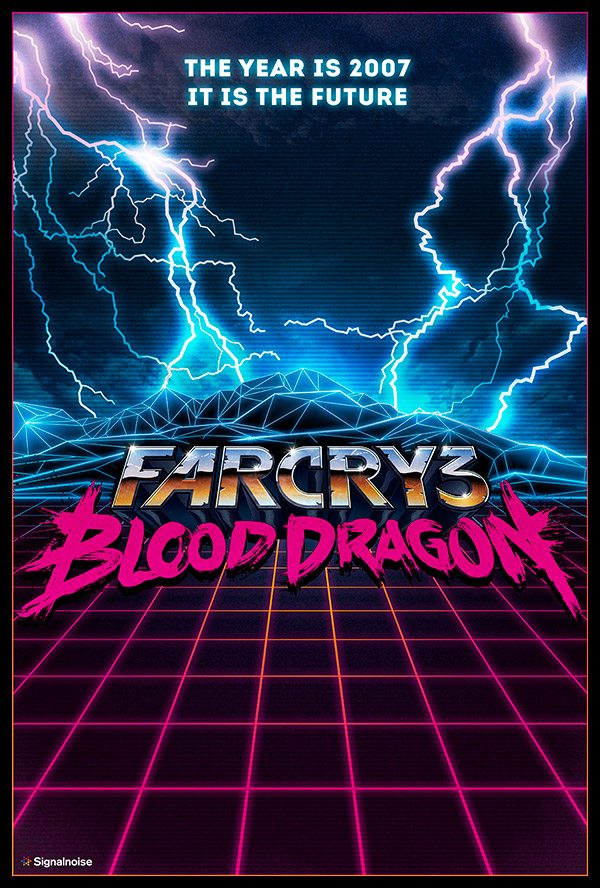 I need to preface this by announcing I’ve never attempted to do a video game review before. I’ve been a PC gamer since the days of Doom back in the early 90’s and since that time I’ve played a lot of great games but it wasn’t until I finished Blood Dragon, the new DLC for FarCry 3, that I’ve felt compelled to write a review. FarCry 3 was a pretty great game even with all the “Bros” in it, and its just a given that a great game that sells well will have at least one DLC add on game that usually expands the story or tells another story in the same world. The best examples are Grand Theft Auto 4’s DLC campaigns that focused on new characters in the same city and time period as the main game.

So it was a real shock when the DLC for FarCry 3 was announced as being a completely different game with different characters and settings having nothing whatsoever to do with the Farcry 3. The only similarity between Farcry 3 and this game is that they both take place on an island. The year is 2007, its the future and the world is a post apocalyptic dystopia! Rex Colt is a Cybercommando tasked with stopping a psycho soldier named Sloan who has hold up on an isolated island protected by cyborg soldiers and dangerous cyborg animals everywhere. The plot is right out of a bad 80’s action flick and the look of the game is heavily inspired by the same. Blood Dragon is a love letter to stupid 80’s action films and its glorious! There is colorful lights everywhere and an overall reddish haze that seems right out of Total Recall. In fact the look of the game seems to be most heavily inspired by The Running Man and Total Recall. The android soldiers you’ll face off against are all adorned with superfluous led lighting all over their uniforms. The control panels and computer labs you run through are all blinking LED’s and gloriously low tech. Just like in the movies you’ll see lights accenting a tree or a bush in the middle of a field for no other reason than it looks cool. Your weapons will have led’s and florescent accents and your character wise cracks at every kill.

The game begins with an excruciatingly irritating training mission that is riffing on every training mission you’ve ever played. It knows its irritating and that’s the point.  Once you’re past that the game is mission based so you can go through each mission quickly and watch the glorious 8-bit cut scenes that look right out of Contra.  Or you can take your time, explore the island and take out the garrisons that pepper the island.  There’s also video tapes you can collect, each with a synopsis for a bad 80’s movie, and of course the staples of first person shooters, like files and boxes and crates to loot for ammo and health.

My favorite thing about the game however has to be how every animal on the island is some kind of glowing eyes cyborg for no reason.  The king of all the creatures is of course the Blood dragons that shoot lasers out of their eyes and attack anything that moves near them.   Luckily you can tear the hearts out of the cyborgs in the game and use them send the dragons to your enemies.  It seems they like the scent of cyborg hearts so throwing a couple into a garrison or a group of cyber soldiers will attract a blood dragon.  Then all you have to do is sit back and watch the dragon kill and devour all the soldiers!

If I have a complaint about this game its that its too short.  I love visiting this world and killing 80’s cyber soldiers but it goes by pretty quickly.  There’s already some talk about a sequel which I’m very hopeful will be a much larger and fully realized game as opposed to a short DLC.  Everything from the lighting to the music is spot on in Blood Dragon and best of all its a really fun game that never takes itself seriously.  How many games let you ride a heavily armored dragon with mounted lasers and missiles?  I really hope this becomes a trend and we start seeing DLC’s that turn the game they’re based on into a entirely new experience.