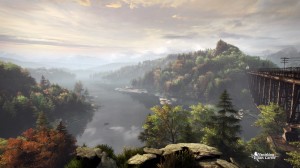 Its not too often I play a game that I think deserves a review but from time to time one does come along that I actually care enough about for me to put into words how it made me feel.  The Vanishing Of Ethan Carter is one such game.  I recently downloaded it for some Halloween themed gaming off Steam.  Its a fairly quick play through, I maybe spent 3-4 hours playing it in total over the course of 2 days.

In the game you play a Paranormal investigator that has received many letters from Ethan Carter.  Ethan talks about a lot of stuff he should not know about.  He found a secret room in a house and now his family is changing in a bad way.  By finding the room Ethan let something evil out and now your character is coming to find Ethan and help him.

The Vanishing of Ethan Carter is a first Person adventure game that is simply stunning to look at.  The environments are highly detailed and the environment effects are very life like.  Usually with adventure games of this type we’re usually treated to technology that’s far behind the times and clunky.  Just go through Steams Adventure Horror category and marvel over all the old looking screen shots on new games.  This is usually because the games come from independent developers with little budget for the gloss and sheen of a modern game.  But The Vanishing Of Ethan Carter didn’t skimp on any of this.  You’ll look out onto breathtaking vistas and see environments where it seems every individual blade of grass is moving.

The sound Design is also excellent! The environments sound real and it just ads to the overall effect.  The game takes place in the 70’s and the soundtrack has sort of an old Howard Shore film score sound to it.  It reminded me of scores for The Dead Zone or The Brood from the 80’s and late 70’s.  It really works well and fits the overall feel of the game.

This game does not hold your hand or provide any training on how to use the games features.  You’re basically set out and you have to figure things out on your own.  Along the way you’ll come across things you can inspect and those will lead to clues and on screen “thoughts” that your character is having.  Usually you find a dead body and then have to piece together what happened.  Once you do find all the clues you can touch the body and see a replay of the persons death and the events directly leading up to it.  Its a pretty interesting way of presenting the info and it doesn’t feel quirky or silly at all.  Somehow it all makes sense in the world the game has created.

The story takes some twists and turns and finally leads up to an ending that’s both sad and a little disappointing, at least for me anyway. But its a quick play and the game play and environments make up for any flaws in the story pretty easily.  Its a good play through for a Halloween weekend or a dark and stormy night.  It has some good jump scares and I felt the hairs on the back of my neck stand up more than a couple times. You can find the game on Steam and GOG for PC.  If you like Horror themed adventure games then you’d be hard pressed to find a better recent release than the Vanishing of Ethan Carter!