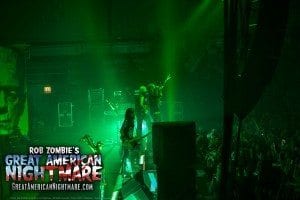 Opening weekend at Rob Zombie’s Great American Nightmare in Chicago was an awesome experience!  I was invited out to shoot photos and video of the opening night where Rob Zombie himself played to a sold out crowd!  The concert was amazing even though Rob wasn’t able to do some of his more advanced stage effects such as the pyrotechnics but it was still an amazing show!  I think regardless of whether or not you like Rob’s music you’ll still love his show. He’s a true entertainer and really gets into his performances!  The night was a little extra special since it was Shari Moon Zombie’s Birthday as well!

The haunts are of course stunning and highly detailed!  The murder ride features all the murderer’s from House of 1000 corpses and then some including John Wayne Gacy which has been causing quite a stir in the Chicago area since that’s where the murders took place.  However this is a haunted house and more over its a Rob Zombie Haunted House so if you are expecting puppy dogs and fairy tales then you should probably go somewhere else. Rob’s never shied away from controversy so its only fitting that John Wayne Gacy be a comical addition to the “Sick, Twisted, Haunted House” that the event advertises! 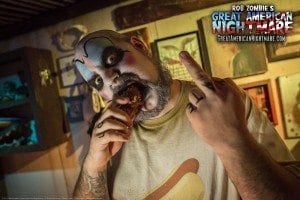 The event also includes the Haunted World of El Superbeasto in 3D as well as the Lords of Salem in Blackout.  Its a full night of “sick and twisted” entertainment and once I highly recommend Chicagoland check out especially for fans of Rob’s music or films!

You can find lots more photos I took at the event on my Flickr Album Here! Check them out!