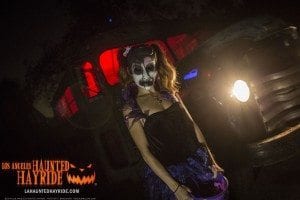 I flew out to Los Angeles to shoot the very cool and unique Los Angeles Haunted Hayride just a couple weeks ago.  This event is always a treat to check out and simply one of the best Haunted Hayrides out there!  Hayrides are fairly difficult to make scary because the audience is sitting in a hayrack and fairly safe from the monsters and creatures in the scenes.  But LA Hayride manages to make people scream every year with their amazing scenes and intense actors!  This year was no different!

The theme is called “Tales from the Rift” and it all deals with the underworld and the apocalypse.  The scenes range from spooky to outright terrifying and they ramp up in intensity as they go.  One scene has these women carrying babies around the hayrack while wailing and crying.  They take the babies and give them in sacrifice to a demon in a decaying dilapidated church while an angel watches from overhead.  Its chilling and made even more so when the women return to the hayrack revealing their faces as distorted creepy doll like features!

My favorite scene however was the Rift itself.  I wont’ reveal too much but it feels like hell is opening up in front of you when you see it while demonic music feature the band Otep pumps in the background! 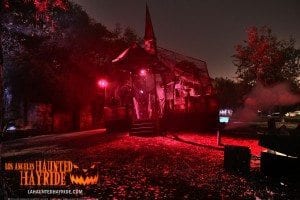 Speaking of music, I want to mention the awesome soundtrack this haunt has!  The event features a custom music piece for every scene at the event.  Each scene is set to play out with the music and it make the experience all the more intense and awesome.  I can’t recommend this enough to haunts that really want to step up their game.  having your scene perfectly timed to music makes it all the more terrifying and memorable for the audience.  The composer of the LA hayride has become a good friend of mine! His name is Chris Thomas and he’s worked on some popular TV shows but his true passion is doing haunt soundtracks!   You can learn more about Chris and download his albums at his website!

The 2014 Trailer I shot for LAHH is also now available Below!