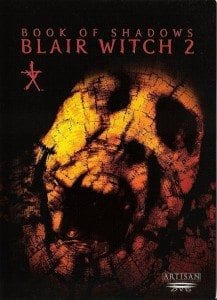 So there are a lot of movies out there that were really hated when they came out.  The best example is probably Halloween 3: Season of the Witch which up through the early 2000’s was the most despised of the Halloween movies.  Today it has enjoyed a resurgence and found its audience.  I hear a lot of horror fans gush about it and it even received a collectors edition Blu-Ray release last year.  But there’s a lot good horror movies out there that have a bad rap and I aim to give their their due.

When the Blair Witch Project came out it was a hit and there’s a lot to admire about  it.  The film itself is one of the fathers of our current “Found Footage” craze but that’s not what made it special.  It was the marketing that made it work.  But that’s an article for another day.  The film studio needed to follow up the film with a sequel in order to capitalize on the first films success.  I think most expected the film to just reuse the concept of the first film and have more kids go missing trying to find the truth behind the Blair Witch legend.  But that’s not what happened at all.

The producers went to Documentary filmmaker Joe Berlinger, Famous for his documentary series called “Paradise Lost”.  Berlinger wanted to say something about how people perceive video and film.  Video shot on consumer grade camera’s is often considered to be real and believed.  Instead of just making a retread of the first film he wanted to actually make a narrative film the used video recorded sequences to reveal “The truth” of what was happening to the characters.  The film would be something entirely unexpected by movie goers.

Book of Shadows opens with a montage of news clips about the First Blair Witch film using some real clips mixed with ones manufactured for the film.  It offers a fairly realistic glimpse into the crap the people of Burkettsville Maryland had to put up with after the first movie.  Berlinger himself appears in the montage touting the website as being a major factor in the reason why everyone thought it was real.  We’re then introduced to Jeff (Burn Notice’s Jeffrey Donovan) who after being released from a mental hospital has created a business around the Blair Witch Project online.  He sells stickmen, rocks, videos, and has started offering tours of the filming locations.  On board for the inaugural tour are Tristan and Stephen, a married couple writing a book on the “Real” blair witch,  Kim is a goth chick complete with black hair and surly attitude, And Erica is a Wiccan defending witches everywhere against any hateful stereotypes the Blair Witch Project may have perpetuated.

The group heads off to the old Rustin Parr home which is now just a foundation with a large tree in the middle of it, something that Jeff points out as odd since the tree is so large and old. Why would it be there.  Already the film is suggesting something about this trip isn’t right. The group decides to set up camp at the Parr foundation but their night is interrupted by another Blair Witch Tour group.  A argument ensues over who has the right to camp out at the foundation but Stephen makes up a story about how disturbing his trip to Coffin Rock, another Blair Witch Project Hot spot, was for them earlier in the day.  The new tour group heads off to Coffin Rock and Stephen, Jeff, Tristan, Kim and Erica party all night at the Parr home foundation. 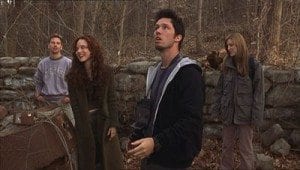 The Next morning the group wakes up to find their camp site trashed, camera’s destroyed, papers ripped apart, and the tapes from the cameras all missing.   They find the tapes in the same spot where the tapes of the missing filmmakers from BWP were “discovered”.  Jeff is convinced that the other tour group from the night before must have come back and trashed their stuff.  Tristan, who we find out earlier in the film is pregnant with a child she really doesn’t want, suddenly miscarries during all the commotion causing the group to pack up and rush her to the hospital where she loses the baby.

The group decides to go back to Jeff’s house where Tristan can rest up before heading home and Jeff can start going through the footage from the night before and determine what happened and who trashed their stuff.  This is where the film really starts getting into its reason for being.  Throughout the film we’re given two versions of the truth.  We’re shown the cinematic version of what the group believes is happening and then the video of what is actually taking place.  Its a very interesting concept but one that’s very polarizing if you’re expecting to get just get a rehash of the first film. 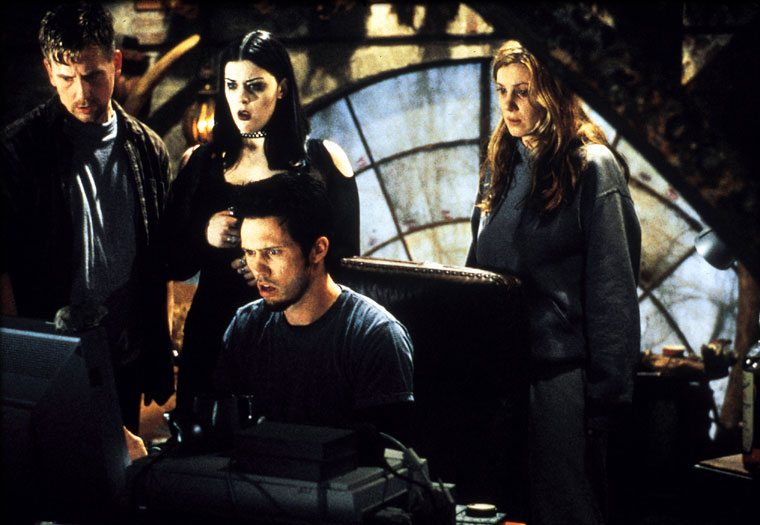 The stakes go up when the Sherriff notifies Jeff that he and his tour group are wanted for questioning about the other tour group that has now turned up dead at Coffin Rock.  The task of deciphering the tapes from the night before becomes much more urgent in an effort to clear their names.  As Jeff and Kim go through the tapes, slowly the truth starts coming out and everyone starts unraveling as the film leads up to a reveal of what really happened the night before.

There’s some really interesting ideas going on that don’t always work out but these ideas still manage to elevate the film. The easy route would have been to just make another found footage sequel where another group goes looking for the Kids from the first film and go missing as well.  Instead they allowed a documentary filmmaker to come in and make a very meta sequel that puts a magnifying glass on how we interpret video and cinema and what is truth and what isn’t.  Something that was pretty interesting then and even more so now.  Its a bold choice and one that I can’t see any film studio making in this day and age. Even more surprising the DVD was released with a director commentary where Joe Berlinger complains about how much the studio made him change in the final film.  He also offers insight into just how quickly the film was made.  The first Blair Witch Project came out in the summer of 99′.  The sequel was shooting in Maryland in April of the 2000 and in theaters in October!  When you take that into consideration some of the problems with the film can be overlooked.

Book of Shadows was almost universally reviled when it was released.  Rotten Tomatoes critic aggregator lists it at a lowly 16% making it very rotten according to the critics.  But this is fairly high concept horror film that completely shattered expectations and tried to make a sequel that turns the camera on the first film’s hype and has something to say about it.  Unfortunately it wasn’t appreciated and likely never will by anyone except the most hardcore horror fans.  In a world where found footage series like Paranormal Activity just keeps remaking the same story about rich people in McMansions its refreshing to see some risks being taken with a sequel.  Unfortunately Book of Shadows may be why we keep seeing the same Paranormal Activity movies over and over again.

I personally loved Book of Shadows right from the first viewing.  It was my favorite Horror film from that year and its still a movie I watch about once a year in October.  I encourage horror fans to give this one another chance away from the hype of the Blair Witch Project.  Its unjustly hated and deserves a second chance to win over some fans!