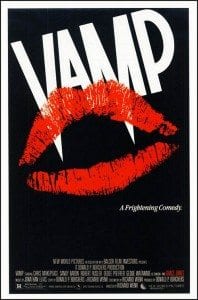 Vampire movies are a young persons game. Lonely emo vampires searching for meaning to their existence perfectly fits into the emotions of lonely teenagers. So I’m not really a fan of modern vampire movies because they’re just not something that I can relate to on any level anymore. But I still like revisiting some of the vampire flicks I grew up with and recently I picked up the blu-ray edition of “Vamp”, a film I remember liking as a 10 year old boy but does it still hold up?

They eventually end up at a club that only opens “After Dark”. AJ heads in alone first to try to chat up a stripper to take back to the fraternity. Duncan can’t stand waiting and says quite possibly the best line of the whole movie. Kevin gives in and heads inside with Duncan where they get to see a truly bizarre bit of “performance art”? If you don’t know who Grace Jones is then you didn’t grow up in the 80’s. She was a very tall Jamaican woman with very strong features that make her both very unusual and beautiful at the same time. She was fairly popular in the 80’s starring in Conan films with Arnold Schwarzenegger and most famously the final Roger Moore James Bond film, “A View to a Kill”. In Vamp she’s the main Vampire and doesn’t say a single line in the movie. She performs a strip tease covered in a tribal like body paint with brass spiral rings covering her naughty bits. I use the term “Dance” very loosely here.  Her performance is better compared to convulsions because she basically goes between clawing at the audience like a cat and then draping her body over a statue and shaking violently. Its a lot of things but Sexy it ain’t.

For some reason everyone in the audience is left silent and dumbstruck by the peformance. AJ decides that Grace Jones is the one for the Frat party and dissapears back stage to find her. The Negotiation don’t go to well however, and she kills him. Meanwhile AJ’s friends are oblivious to what’s happening and finally get help from a new waitress to find out what’s going on. From here things just start getting weirder.

Much like “After Hours” Vamp has a drifting sometimes aimless narrative that both works and hurts it. The film is filled with strange characters that pop in and out of the story line at convenient times. The mistake the film really seems to make is placing all the faith in actor Chris Makepeace who plays Kevin. After the much more charismatic AJ (Robert Rusler) is dispatched Kevin becomes the lead actor and Makepeace acting is stiff and awkward. I swear this man is incapable of even walking across a room without “acting” that he’s walking across the room. With a better actor the second and third acts of this film wouldn’t slow down to a crawl.

Director Richard Wenk slathers the film in 80’s purple and green lighting through almost the entire run time. I would say this looks like crap if I saw it in a modern movie but this is an 80’s movie and for whatever reason it seems to work. Wenk seems to know how to set up some interesting ideas and visuals and they do mostly work for the film.

I saw this movie when I was pretty young, maybe 12 years old and I really thought it was great then. This time twenty some years later I still had fun watching it even if the problems were much more glaring then they were back in the day. If you have a love for 80’s movies or watched this when you were a kid then I still can honestly recommend checking it out again. Its a fun bit of nostalgia that certainly has enough insane weirdness to keep it interesting even 30 years later.