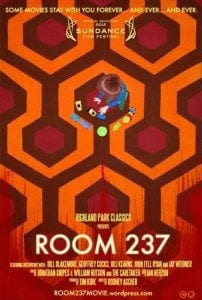 Conspiracy Documentaries as a genre may have just jumped the shark. The Shining is considered one of the greatest horror films ever made and there’s tons of interesting real information out there about its making. I’ve been a fan of the film since watching it in high school and finally being able to comprehend what the movie was all about. There’s a lot that can be said about the movie and its content. I could debate the changes between the book and Kubrick’s vision and why he made them. Or we could discuss if what Jack is seeing is real or just a hallucination. We could discuss the behavior of the characters and why they make the decisions they make. Or a plethora of other subject the film raises. Like almost all of his films, Stanley Kubrick wanted there to be different interpretations and discussions. He wanted us to have to work to understand what he was trying to show us and in most of his films, he didn’t care if you got it or not. He made the film he wanted to make and The Shining is no different.

The Shining is dense enough on its own but there’s a huge number or conspiracy theories on the internet about what he true meaning behind The Shining really is. Some of them are mildly entertaining and likely true such as the Collative Learning series by Rob Alger that covers things like “impossible Geography” in the film. Then there are the insane theories ranging from the whole movie actually being Kubrick admitting he faked the moon landing to the whole movie being about Minotaurs. Yep, minotaurs.

Room 237 is a documentary solely about he crazy theories that are out there regarding the Shining and its production. The filmmakers present the theories in voice over in the theorists own words over footage from the film, other Kubrick films as well as the horror film Demons for some reason. We never see the faces of the theorists, we just see footage presenting the information and this is what’s wrong with the film. While some of these theories are sort of fascinating others are just bat shit insane and the real story here should be about the theorists themselves and not the theory. What is the person like who feels adamant that the movie is actually all about minotaurs? What is life like for the man who says he had a to quit his job because he had become so obsessed with finding hidden meanings in the film? That’s the story I’d much rather see. Who are these people who come up with these theories?

Instead we’re given 100 minutes of voice over with film footage explaining these insane theories. The moon landing theory has been around for a pretty long time and its one that just doesn’t hold any water in my eyes. The theories presented on the strange geography of the overlook are interesting and likely intentional by Kubrick. Then there are the theories that claim any error you see in the film must have been intentional. For example When Wendy confronts Jack about the woman in 237 attacking Danny, we see a chair placed behind Jack suddenly disappear from the scene. In this same room we see the Typewriter change from a white one near the beginning of the film to a grey one later. Here’s the thing. The Colorado lounge set, where all this takes place burned down during the making of the film and had to be rebuilt which means all the set dressing had to be found again and put back in the scenes. Now its very very likely, considering Kubrick’s infamous long shooting schedules that different takes of the same scenes where were filmed weeks if not months apart so its understandable that the sets may have changed some unintentionally thanks to time and fires. I agree that Kubrick likely obsessed over items that appear in the background of a scene but he’s not infallible and I think most of the continuity errors we see in the film are just that.

Room 237 presents some interesting ideas but for me it just completely misses the real story by not examining the people behind the theories. That’s why for me this documentary is little more than a another youtube video espousing crazy conspiracy theories to anyone who will listen.

Room 237 is available on SundanceNow.com VOD