Posted On December 3, 2012In Christmas Horror 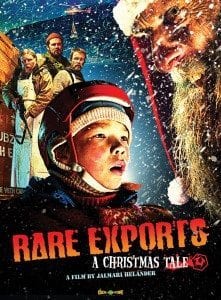 So Christmas Horror films are a very mixed bag of supernatural creatures, serial killing Santas, and vaguely connected to the holiday spooky happenings. Luckily we seem to be getting more and more of them each year which at least makes the Xmas season bearable for us horror fiends. So there’s bound to be a few gems right?

If your the kind of movie fan that feels like Christmas Horror films could use 100% more old man penis then “Rare Exports: A Christmas Tale” is for you. Hailing from Finland, Rare Exports looks beautiful, shot in some of the most picturesque locales I’ve ever seen. The film follows a young boy named Pietari who lives up in the mountains with his widowed father. Pietari and his friends stumble upon a group of Americans working on the mountain that are digging up the real Santa buried deep underground. But or course something goes wrong and things start getting really weird.

The relationship between Pietari and his father, Rauno, is rather strained. Its never really revealed how the mother died but its left a big hole in both Pietari and his Rauno’s lives. They sit awkwardly not speaking to each other for long periods of the film. But, Rauno still tries to do his best when it comes to Christmas. He makes Gingerbread cookies, decorates and gets gifts for Pietari.

When Rauno sets a trap for some animals he inadvertently catches what Pietari believes to be Santa. Its a naked, skinny old man with a long beard. Thinking its an American that’s been working on the mountain, Rauno calls the only English speaking friend he has and they devise a plan to hold the man hostage until the Americans pay up. Slowly they realize they may indeed have Santa Claus here so they get in contact with the Americans to set up a meeting to exchange Santa for the money.

However much stranger things are afoot. All the heaters and furnaces in town are stolen the night before and shortly after that the children, with the exception of Pietari, start disappearing. All this leads to a big ransom meet where the truth about the old man they’ve captured is revealed and the film sets itself up for a (somewhat) epic ending.

There’s a lot of naked men in this movie. The elves are old skinny men who run around dirty and naked the majority of the film. Maybe this is just a Finland thing but its a bit off putting by the final reel when we’re treated to a big shower seen where all the elves are being cleaned up.

Rare Exports is a pretty film. The direction is slick, the cinematography is beautiful and the scope feels bigger than it actually is. There’s one fairly major plot point that never gets a nice full reveal that left me wanting more but Rare Exports is certainly worth checking out. It started as an internet short film that also features more old man penis than you would ever want to see but if you’re so inclined you can see it below.

Rare Exports is a strange little film but one worth checking out this Christmas.