Posted On January 24, 2013In Horror Television 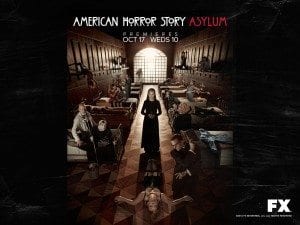 I watched the first season and American Horror Story and liked it overall. It had a lot of hiccups along the way and the show had a cast of characters that were all pretty unlikable. But It still managed to keep me coming back each week, if for nothing more than its awesome visuals and crazy twists. It was a sexy soap opera for horror fans and not much more than that.

AHS season 2 piqued my interest as soon as it was announced that it would be a different story entirely with the same actors returning as different characters. Plus I’m a sucker for stories about creepy hospitals, asylums and the like. The first episode surprised me with how much it packed in. There were corrupt priests, evil doctors, insane nuns, crazy serial killers and even space aliens! Yes, space aliens. As the season went on it only got more crazy and more interesting. The characters had more depth, were more likable even with their faults. We saw wrongly accused people find redemption, people with dark pasts finding forgiveness and twisted people getting just ends. It was a pretty breathtaking run and I was shocked at how far they pushed the envelop this season. Some of the sick twisted shit that happened on AHS this season made you want to shower after watching it! There were a few times where I was genuinely surprised by what the producers were getting away with.

Ultimately the series came down to being about three people who had been wrongly imprisoned in the Asylum and how they got out and found redemption. The final night of AHS was actually touching and worthwhile. Where the first season felt empty and shallow even up to its whimper of an ending, AHS:Asylum proved it can balance the horror, the sex and the violence with a real story about real people struggling under significant odds. In the end Asylum became about coming to terms with your past and forgiveness.

American Horror Story surprised me in so many ways this season and I hope they can keep it up for season three which will again be a new story with some of the same actors as the first 2 seasons. I can honestly say I’m excited about it!