Posted On February 10, 2013In Uncategorized 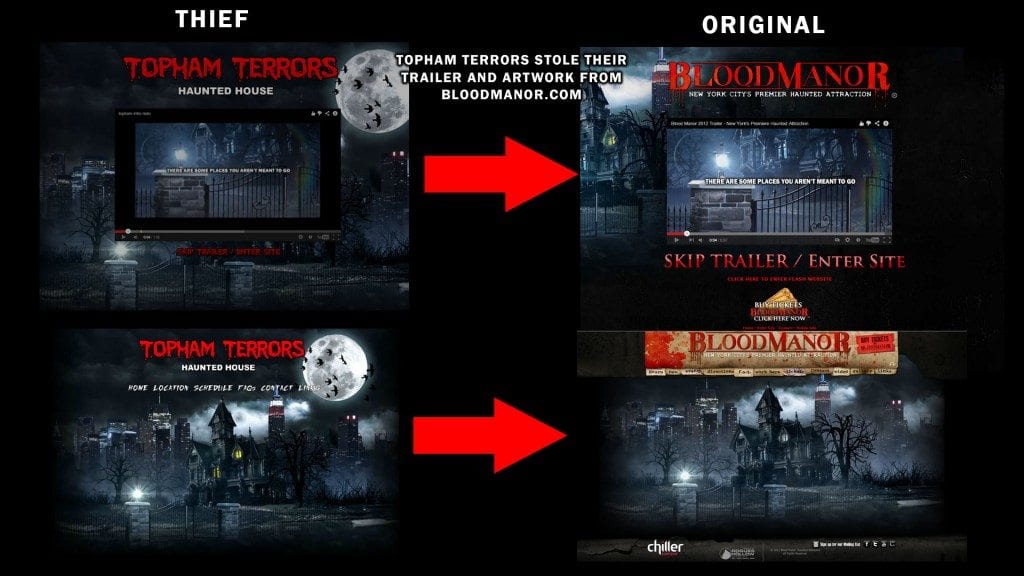 So last night I had a fellow designer alert me to a website that not only stole artwork from one of my client’s site but also video! The evil art stealing dbags are TopHamTerrors.com and you can see the artwork and video here: http://www.tophamterrors.com/intro.html
Which is theft from – http://www.bloodmanor.com/2012/index.html
The designer is a company I’ve never heard of and a quick perusal of their site I didn’t find any other sites they created that infringed on my artwork. But the facts is they went to blood manor stole the image background there then downloaded the video from youtube.com and slipped in a few additional video clips and decided to call it their own.

In addition to this they took video clips from Thornhillwoodshauntedhouse.com and peppered them throughout their site. This ones even worse since Thornhill Woods Haunted House is a Home haunt and they used their family and friends for the videos so its pretty obvious where they came from. Whats worse is TopHamTerrors.com is apparently in close proximity to Thornhill Woods haunted house and so it is bilwidering why the owner of TophamTerrors.com chose a local home haunt to steal from when people will quickly figure it out.

So since this happened I alerted my clients to it. My client in Thornhill woods told me the guy at TopHamTerrors isn’t taking anything down because the owner thinks its ok to steal and change things slightly then reuse them. Which brings me to a bigger issue. A year or so ago I had a heated argument with a young “designer” who argued he could take whatever image he wanted from another artist as long as he changed it a little and then claim it as his own. What scares me is there seems to be how a lot of people think. They believe a Google Image search means “Free Photos” they can take to use. Its a big problem with not only the haunt industry but also the design business in general.

The Blood Manor artwork uses a very famous house in California. This is a mansion that has been copied and done to death a thousand times in the industry and I’m certainly aware of that. But Blood Manor is the client and they wanted to use that house. While I tried to convince them otherwise they were set on using it and what they want is what I’m paid to do. So I went out of my way to find a photographer to purchase a photo of the house because that’s what you do. You don’t go out and take something that already exists. I then heavily modified the house’ porch and of course added all the other elements including the yard, trees, fence etc. There’s hours of work that go into a piece like that and for someone to just claim they can spend 5 minutes making some changes to it and they own it is like a punch in the face.

If you are a designer then you should know there are plenty of Stock photography websites you can go find photos and use for your haunt art. So do everyone a favor, especially your clients, and legally purchase photos or take photos yourself and Photoshop them yourself. Don’t steal. You may get away with it for awhile but it will catch up with you and when it does I hope you’re ready for the consequences.

UPDATE 2/11/13
I spoke with the owner of Topham Terror who admitted that the designer of this website, DarkNET Designs had nothing to do with the artwork from Blood Manor. Topham now claims they purchased the artwork and video from someone on Hauntworld but can’t remember the name apparently. Yeah, right. So anyway I want to make it clear that DarkNET did not knowingly use the copyrighted artwork from Blood Manor.com.