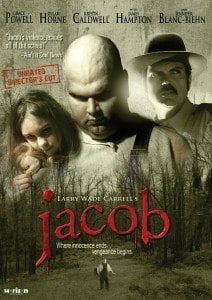 Back in 2002 I was finally getting Rogues Hollow up and officially in the haunted house industry and my first Haunted House client was a man Named Larry Wade Carrell. He was a very sweet man with a big dream to open a haunted house in Houston called, The Nest. The website I created was my first big foray into all Flash website design and by todays standards its pretty low tech and outdated but it was pretty special at the time. Larry worked closely with me and we really built some fun and cool imagery that people to this day remember and comment on at tradeshows. The Haunt’s story was a pretty wordy one about a Jason-like character, named Jacob, that goes on a killing spree and is now haunting The Nest. Unfortunately it didn’t do too well that first year and Larry decided what he really wanted to do was make movies. Of course the Nest lives on today in Phoenix Arizona each October! But Larry never forgot about the story and finally last year he was able bring the story of Jacob Kell and The Nest to life in a full length feature!

The film “Jacob” begins in the 1970’s where we find a bully scumbag named Otis that’s beating on his girlfriend Edith. The mans brother Billy is a deputy in town and he and Sheriff Andy appear on the scene to haul Otis in once again. The scene gets interrupted by a big hulking man of a boy named Jacob, who grabs Billy with supernatural strength and lifts him off the ground. Only Sissy, his young sister can calm him down and keep him from snapping Otis in two. We’re introduced to Jacob who is supposed to be 16 but looks much older, and looks to be over six feet tall, 350 pounds with a shaved head. He never says anything but he has lots of voices in his head with plenty to say to him and what they have to say isn’t good. Eventually Otis sets off a series of events that finds Jacob going on a killing spree and taking on a blood thirsty lynch mob!

One of the many interesting things about the film is that Larry decided to not only direct but he’s also playing two characters in Otis and Billy.  When I first heard this back before production I thought it was nuts.  The characters are very different, Otis is loud mouthed white trash while Billy is a timid quiet man.  Somehow it works and you almost forget that these men are supposed to be twins or that the same man is playing the roles.  The film has some Rob Zombie influences with its Redneck antagonist and his buddies yet it manages to avoid becoming too cartoonish or annoying.  I have to say that the Otis character isn’t too dissimilar from people I knew back in my hometown growing up.  Most actors in the film turn in solid performances but its young Grace Powell, as Sissy, that runs off with the film.  She looks to be about 10 or 11 and she turns in an amazing performance as Jacob’s sole voice of reason.

Make no mistake, this is an independent feature and at times it does show and at other times it shines and looks like a million bucks.  The cinematography alone does a lot to elevate the film.  The opening credit sequence we see this barn full of dolls lit by candlelight that just looks stunning and really sets up the mood of the film right from minute one.  The lighting isn’t overdone like so many films do these days and the director knows how to use it in dramatic ways to tell the story.  With the exception of a handful of shots the ‘Jacob’ looks stunning, sharp and beautiful.  The music is another aspect that really elevates the film.  Composer Iain Kelso presents a very sophisticated and haunting score that I hope we’ll get to see a actual soundtrack release for.

I knew the story of Jacob Kell going into this viewing and I knew there was a lot to it. Director Larry Carrell wisely chose to only reveal about half of it while offering glimpses of what the other half was about, which I liked.  Michael Beihn plays Jacob’s Father in flashbacks which give us more insight into what it is that is speaking to Jacob.  His father is left an old house by relatives, a house that is said to be haunted and that house becomes an obsession for him.  I have to say I really dug these flashback scenes that did a lot to further the backstory of the characters. If there’s ever a chance at a sequel it would be fun to see where this part of the story could go.

Jacob is not a perfect movie, but its a well made independent horror film with some great humor, gruesome gore, and some solid performances.  Its clear that the people behind it had a passion for the material and it delivers something that’s different.  That’s more than I can say for the majority of major theatrical picture releases.  It has a lot of heart and it was a lot of fun to watch!  I hope we will get to see some more from this director in the future! Please support independent horror and click on the link below to purchase “Jacob’: